SCOTRAIL FRANCHISE TO END IN 2022

ABELLIO’S OPERATION of the ScotRail franchise will end in March 2022, three years earlier than planned. 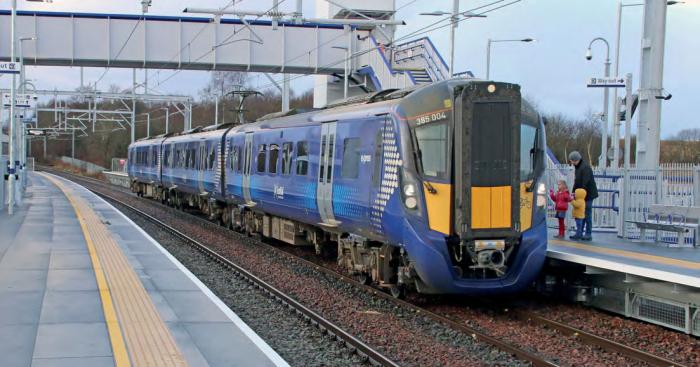 New station: Robroyston, a £14 million structure built on the site of a former station by AMCO, opened on 15 December 2019. Situated between Stepps and Springburn stations on the Glasgow to Edinburgh via Cumbernauld line, the station serves a proposed 1,600-home development with a half-hourly Class 385 service. This is No 385004 on the first day of operation.
Ian Lothian

Abellio’s franchise began in April 2015 and was due to run until 2025, but with a break point in 2022. Transport Secretary Michael Mathieson told the Scottish Parliament that a rebasing process has been underway with the Scottish Government and the operator revisiting cost and revenue assumptions and considering whether they should be revised, determining future subsidy levels. The rebasing process began on 1 October and a decision on whether to serve a ‘No rebasing’ notice, ending the contract early, was required by the end of 2019.

Ministers have decided not to rebase the contract, meaning existing subsidy levels will remain in place until the franchise ends, expected to be in 2022. Mr Mathieson told the Parliament that ministers are ‘not satisfied that the significant increase in public subsidy that would otherwise be required would generate commensurate benefits for passengers, communities and the economy’

Abellio UK Managing Director Dominic Booth said: ‘We are hugely disappointed by this decision and believe it’s the wrong choice for Scotland’s Railway and its customers.

‘Our offer to Transport Scotland would have delivered an improved service for our customers at a reduced cost to the taxpayer.’

Discussing the possible operation of ScotRail once the franchise ends, Mr Mathieson told the Scottish Parliament he was keen to ‘get rid of franchising’ and have a public sector operated service ‘which meets the needs of Scotland’ However, he said the Scottish Government is awaiting the outcome of the Williams rail review led by the UK Government before any such changes can be made.