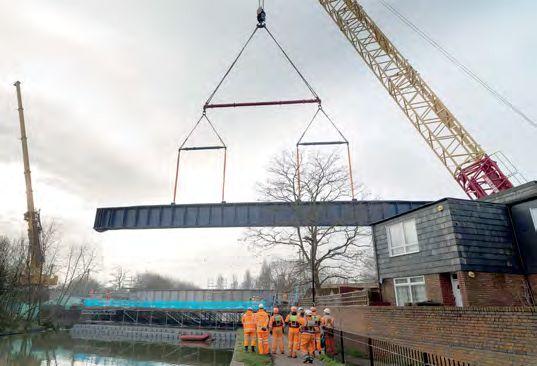 Slowly does it: the new bridge is lowered into place over the Lea navigation.

A NEW bridge has been installed at Tottenham by Network Rail and VolkerFitzpatrick as part of works to lay a third track between Stratford and Angel Road.

The STAR (Stratford – Tottenham – Angel Road) project will enable two additional trains per hour to operate on the line at peak times. The work is part of NR’s Lea Valley programme, with the third track being installed on disused land between the new station at Lea Bridge, which opened in May 2016, and the new Meridian Water station at Enfield, which is yet to be built. Improvements at Tottenham Hale and Northumberland Park stations also form part of the work, which is due to be completed in 2019.

The bridge in question carries the railway over the Lea navigation. The installation included the lifting of 40-metre-long girders over the adjacent line using a 600-tonne crawler crane.

The programme is jointly funded by the Government, the Mayor of London, the London Economic Action Partnership (LEAP), Transport for London, and Enfield and Haringey Councils. As well as increasing capacity on the West Anglia main line, the work will also accommodate proposed plans for Crossrail 2.