A PAN-INDUSTRY body chaired by Network Rail director Chris Gibb is scrutinising the Thameslink 2018 timetable with a view to accommodating the interests of all stakeholders. The move follows worries that putting 24 trains per hour (tph) through the Thameslink core could adversely affect other services. One eyecatching example is London to Sheffield, where it is understood that timings could be extended by as much as 12 minutes if the first timetable suggested for Thameslink were to be implemented. ‘It hasn’t worked first time round,’ reported a source familiar with the issue, ‘so there is a pause while we find compromises’.

The Industry Readiness Board is understood to bring all the interested parties together, from both Network Rail and the affected train operators, with a view to hammering out compromises by the summer. But it has become clear that the intended schedule for introducing a more intensive timetable is likely to be loosened, with a phased introduction under review to guard against any operating meltdown that might ensue with a sudden introduction. The original plans were for preliminary changes in January 2018, the main changes introducing 20tph in the peaks coming in May 2018 and the full 24tph (16 via London Bridge and eight via Elephant & Castle) in December 2018.

Operation of 24tph through the core, where automatic train operation will take place, is not thought to be a problem: the issue is presentation of services in the correct order north and south of the core. Buffer time at places such as the Canal Street tunnels linking the Thameslink core to the Great Northern network is one possible solution being considered.

In contrast to Crossrail, where the complete route from Shenfield to Reading is undergoing comprehensive modernisation, Thameslink will be plugging some unmodernised branches into the updated central London core.

The Thameslink route network is also more complex than the Crossrail map. One tactic is expected to be splitting the Thameslink network into a dozen pairs of self-contained services with their own drivers and trains and no changing of drivers en route.

Also under study is crowd control in the central area in the event that services get out of order and large numbers of passengers have to wait for their train. The focus is particularly on Farringdon, where there are narrow platforms on the Thameslink route and many people will be interchanging with Elizabeth Line services from December 2018 onwards. 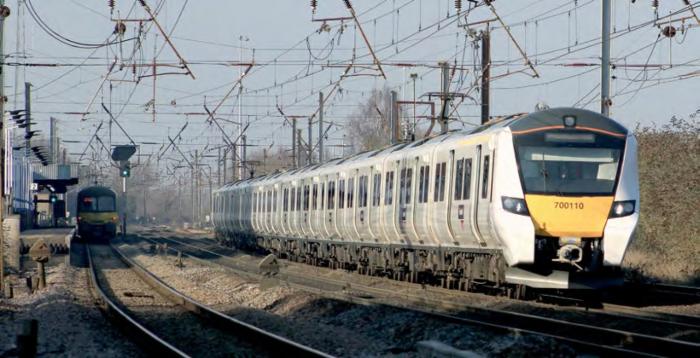 ‘700’ on test: unit No 700110 at Hitchin while en route to Hornsey from Peterborough Spital yard on 14 February 2017 after testing the new sidings recently completed there for forthcoming Thameslink operations.
Roger Carvell

While some comparisons have been made with the operating difficulties that hit the CrossCountry network when the Operation Princess changes were introduced in 2002 (p9, January issue), proponents of the new timetable claim that today’s centralised train planning at Milton Keynes is better placed to co-ordinate changes than the old fragmented system.