THREE PEOPLE have died following the derailment of a ScotRail HST near Stonehaven on the morning of 12 August.

The HST was working the 06.38 Aberdeen to Glasgow Queen Street service and derailed between Stonehaven and Carmont. Three people were pronounced dead at the scene – the train’s driver Brett McCullough, its conductor Donald Dinnie and one passenger, Christopher Stuchbury. The other six people on the train, including one further member of staff travelling as a passenger, were taken to hospital and treated for their injuries. 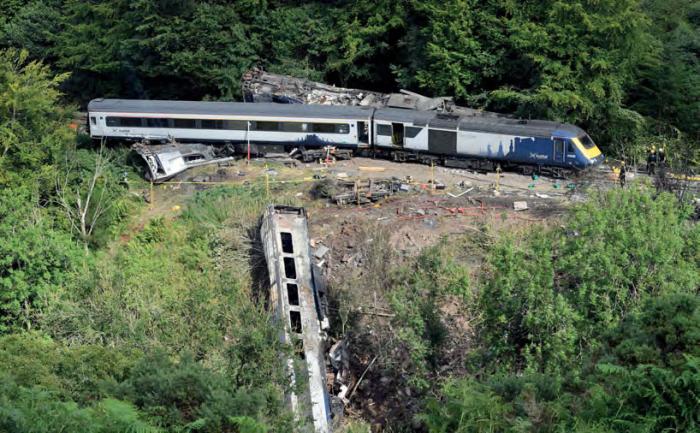 According to the Rail Accident Investigation Branch, all six vehicles of the train (two power cars and four Mk 3 coaches) derailed at around 09.40 after striking a landslip around 1.4 miles north east of Carmont. The southbound service had departed on time from Stonehaven and continued on the up (southbound) line until it was stopped by the signaller at Carmont using a radio message. The signaller informed the driver that a down (northbound) train had reported a landslip obstructing the southbound line between Carmont and Laurencekirk. The decision was taken to return the train north to Aberdeen, so it was routed back over a crossover at Carmont onto the down line.

After travelling for approximately 1.4 miles, the train struck a landslip covering the down line and derailed. As the track curved to the right, the train continued in a roughly straight line for around 100 yards until it struck a section of bridge parapet, which was destroyed. The leading power car continued over the bridge and then fell from the railway down a wooded embankment, as did the third passenger carriage. The first passenger carriage came to rest on its roof, having rotated to be at right angles to the track. The second passenger carriage also overturned onto its roof and came to rest on the first carriage. The fourth passenger carriage remained upright and attached to the rear power car; it also came to rest on the first carriage. All wheelsets of the rear power car derailed, but it remained upright. British Transport Police officers were called to the scene at 09.43 and confirmed the three fatalities later the same day.

As well as investigating the sequence of events, RAIB says its investigation will look into management of earthworks and drainage, both in this area and more generally, as well as the behaviour of the train and the damage it suffered.

Network Rail Chief Executive Andrew Haines cut short a family holiday in Italy to return to the UK and, along with Transport Secretary Grant Shapps, Scottish Cabinet Secretary for Transport, Infrastructure and Connectivity Michael Mathieson and Scotland’s Railway MD Alex Hynes, visited the scene the day after the accident.

Addressing speculation that torrential rainfall and flooding caused the accident, Mr Haines said: ‘I will not pre-empt the outcome of the investigation into this awful event, but it is clear the weather was appalling and there were floods and landslips in the area. I have asked my teams to put extra measures in place, from immediate, heightened inspections, to medium-term work with meteorologists to improve information and forecasting.’

The measures taken included inspections of sites nationwide with higher risk trackside slopes by in-house engineers, specialist contractors and helicopter surveys. Extreme weather action teams were mobilised to monitor the network, and dialogue was initiated with meteorologists to understand how real-time information for flash flooding can be strengthened. The programme for monitoring of high-risk sites was also being reviewed to test whether this could go ‘faster or further’.

Mr Haines added: ‘Our climate is changing and it is increasingly challenging the performance and reliability of the railway, but incidents like yesterday’s devastating accident are incredibly rare, and our railway remains the safest major railway in Europe.

‘Our network was designed for a temperate climate, and it’s challenged when we get extremes such as storms and floods. We’re seeing this more and more and although we can address them on the ground with precautionary measures, we are acutely aware we need a long-term resolution, and we had already secured additional funding and resources to help achieve this.

‘Yesterday was a tragedy, a truly horrific event, and my thoughts remain with everyone affected. Understanding what happened is the key to making sure it never occurs again.’ 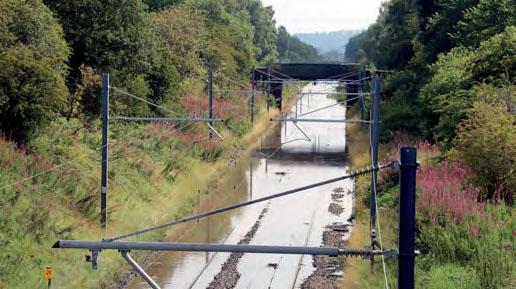 Flagship route shut: storms and heavy rain during the night of 11 August caused major damage to rail routes across Scotland, with ScotRail reporting closures on several routes. Among them were the Highland main line north of Perth and several routes in the central belt, including the Edinburgh to Glasgow route via Falkirk due to flooding and overhead line damage at Lathallan, east of Polmont. The damage at Lathallan was caused by the collapse of a towpath on the Union Canal after water poured off the hillsides, which subsequently flooded the railway. The closure meant Edinburgh to Glasgow services via both Falkirk High and Falkirk Grahamston were suspended while repairs took place, as were Edinburgh to Dunblane services, with reopening not expected until the beginning of September. This is the view at Lathallan on the morning of 12 August.