TPE GEARS UP FOR LOCO HAULAGE

TRANSPENNINE EXPRESS now has 14 Class 68s and is undertaking life-extension work on the Mk 3s to be introduced next year on driver training runs.

Industry sources report the 14 Class 68 locomotives to be hired by Direct Rail Services to TransPennine Express have now been formally allocated into the XHTP (TPE Class 68) pool. Locomotive Nos 68019 to 68032 will be modified to work in conjunction with the Mk 5A coaches and driving vehicles being constructed by CAF. Reserve locomotives Nos 68033/034 will also be able to work with the coaches. 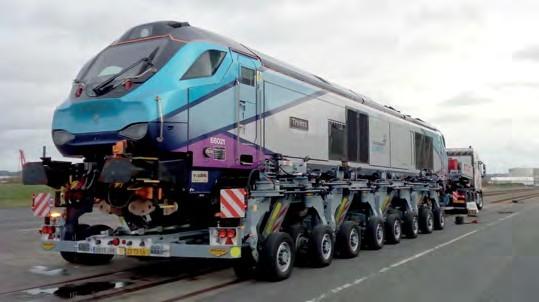 First for modification: No 68021 on the low-loader at Royal Portbury Dock en route to the CAF factory in northern Spain. Upon arrival, it will commence testing with Mk 5A coaches.

Ahead of the commencement of driver training in early 2018, the former ‘Pretendolino’ Mk 3 vehicles that will be hired in by TPE are receiving alight overhaul at Great Western’s Laira facility. Work includes an interior clean following a lengthy period in store, and attention to bogies, which will extend their operational life before any heavy overhaul work is required. Meanwhile, TPE has confirmed a £7 million investment in theconstruction of a new train servicing depot at Scarborough (p51, November issue).