Seven vehicles have been ordered to support the UK pilot of the tram-train concept, which is due to begin operating between Sheffield and Rotherham next year. In the interim the vehicles will be introduced onto the existing Supertram network. The eventual plan is that four will be dedicated at any one time to the tram-train service with the other three operating solely on Supertram infrastructure. The tram-train pilot will see the Class 399 vehicles operate over the Supertram network from Sheffield city centre to Tinsley, where they will access Network Rail infrastructure by means of a new chord before running on to Rotherham.

The service was originally due to start in 2015, but delays with the infrastructure works have set the project back. Network Rail reports good progress is now being made with this work, with the Tinsley chord largely in situ in preparation for it to be connected up next year, while almost all the stanchions for electrification are in place and signalling has been commissioned.

The Class 399 vehicles’ wheels have two different profiles – a tram profile (for operating solely on the Supertram network) and a tram-train profile, to operate onwards to Rotherham. The intention is that specific vehicles will at any one time be dedicated to the Rotherham service using the tram-train wheel profile, although it will be possible to periodically change from one profile to the other.

Stadler will maintain the Class 399 vehicles at Supertram’s Nunnery Square depot. The ‘399s’ initially operated as special workings on the Supertram network outside the normal timetable, but were introduced onto regular timetabled services in October, replacing the original Siemens vehicles. With Supertram previously diagramming 23 of the 25-strong Siemens fleet for daily service, this will allow time for more extended maintenance, which will include addressing corrosion issues and some repainting work.

When the tram-train service begins three services per hour are due to operate between the Cathedral stop in Sheffield and Rotherham Parkgate, although exact timings will be determined by availability of paths on the Network Rail infrastructure. Supertram plans to allocate a specific pool of drivers to tram-train workings to Rotherham, although all drivers will be trained to operate the vehicles on the existing network, and by the time of the first service the training programme for this was almost complete. 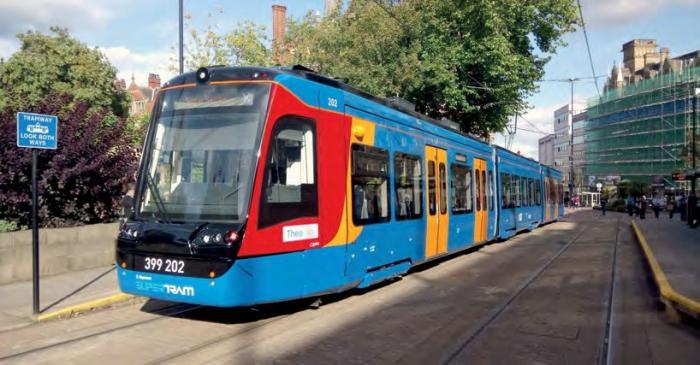 Out and about: Class 399 at Cathedral in Sheffield on 14 September 2017 after working the first passenger serivce.
Philip Sherratt