WELSH FRANCHISE AWARD STILL ON FOR MAY

ABELLIO PULLS OUT DUE TO CARILLION COLLAPSE 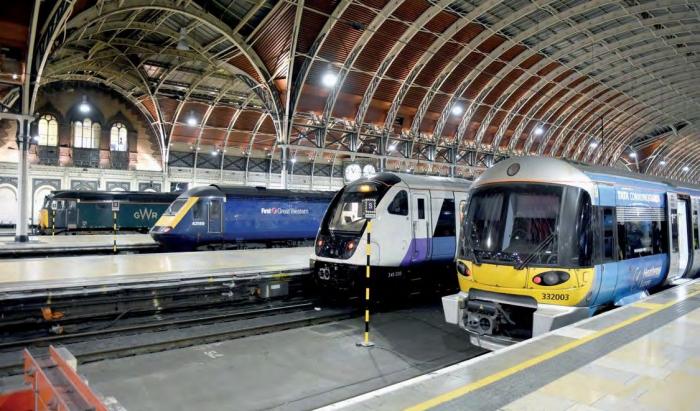 Paddington in the late evening: this 22 February 2018 view at 23.03 shows a Class 345 Crossrail unit on a trial run nestling between the more usual fare of a Class 57 on the sleeper stock, an HST and a Heathrow Express unit. Eiki Sekine

THE WELSH Government is on course to award the contract for the next Wales and Borders franchise in May. KeolisAmey and MTR with Bam Nuttall are the only remaining bidders, following the withdrawal of Abellio in February as a result of the liquidation of Carillion, Abellio’s partner in the procurement process.

On 28 February, a draft order was laid before Parliament that will devolve the necessary powers, subject to approval from MPs, Lords and the Privy Council. However, this is not expected to come into force until June. The third agency agreement is intended to allow the award to be made in May, giving the winner five months to mobilise. Arriva’s 15-year tenure ends in October.

AND THEN THERE WERE TWO

Arriva withdrew from the procurement last autumn. Abellio and Carillion, with consultancy Aecom, submitted their bid in December, shortly before Carillion entered liquidation. Abellio subsequently attempted to find another construction company to step into Carillion’s shoes. It had hoped Aecom would buy Carillion Rail from the liquidator. When it was announced Amey was buying Carillion Rail, Abellio’s involvement quickly ended, Amey being involved in a rival bid.

Announcing Abellio’s withdrawal on 23 February, Welsh transport secretary Ken Skates said there would be no consequential financial risk or delay to the procurement. ‘At the time final tenders were submitted in December, three bidders remained in the process. Final tenders were therefore prepared with strong competitive pressure.’ The remaining bidders could not alter their final bids to reflect Abellio’s withdrawal, he said. ‘We have two strong bidders remaining in the process and remain on target to award this exciting contract in May 2018 and to transform rail services in Wales and Borders from October 2018.’

He revealed TfW had demanded ‘independent financial guarantees by a bank for Carillion’s performance’ in response to Carillion’s first profits warning, in July, and Abellio’s subsequent decision to continue with Carillion as its partner.

Each bidder was required to partner with a civil engineering company because the contract is expected to include infrastructure enhancements and maintenance on the ‘Core Valley Lines’, north of Cardiff and between Cardiff Queen Street and Cardiff Bay. The Welsh Government, which has previously expressed frustration over delays and cost increases on Network Rail projects, has negotiated for the Core Valley Lines to be transferred to its ownership.

Liability for future Valleys infrastructure problems has been a substantial hurdle. In February, Mr Skates said an agreed process with the Department for Transport would handle ‘latent defects during an initial period’. He continued: ‘After that period, and following our investment in the railway, this will be managed through Transport for Wales. As part of this work, Transport for Wales are considering processes that emulate Network Rail’s own liability protections for the longer term. This work will be concluded as part of the due diligence work over the next 18 months.’

An element of Network Rail’s funding will be diverted to the Welsh Government for the Core Valley Lines’ operation, maintenance and renewal. Mr Skates said the amount of this funding would take account of the assets’ condition following the latest round of Network Rail renewals. Rhodri Clark

The Welsh Government has made a pitch to become the franchising authority for inter-city services between London Paddington and Swansea, as well as services currently operated by Great Western Railway between Cardiff, Bristol and Portsmouth.

In its response to the Department for Transport’s consultation on the next Great Western franchise, the Welsh Government argues its joint working with the UK Government over the next Wales and Borders franchise demonstrates how the proposed new franchise would take account of both governments’ interests.

This arrangement would improve integration of local and long-distance services within South Wales, according to Welsh transport secretary Ken Skates, who also claims it would ‘result in real competition and genuine choice for passengers in England’. He proposes that, in the longerterm, the Welsh Government takes responsibility for franchising of Inter-city West Coast and CrossCountry services that cross the England-Wales border.