A NINE-DAY blockade on the East Coast main line planned for September will be the key landmark in the construction of a dive under at Werrington, north of Peterborough.

The dive under is being built as part of Network Rail’s East Coast upgrade, which will increase capacity on the route by the end of 2021. At Werrington the grade separation will remove conflicts posed by trains crossing the flat junction from the Stamford lines on the west side to access the so-called Joint line to Spalding, a manoeuvre chiefly undertaken by long freight trains. The gradients into and out of the dive under have been optimised to be as steep as possible while allowing a fully loaded freight to restart.

Work carried out so far has involved moving the Stamford lines 30 metres to the west to make way for the south ramp of the dive under, with this work completed over Christmas. This required the creation of a replacement river alignment for Brook Drain North and a new fenced off area for newt ponds, with 88 great crested newts translocated.

Now the key focus has moved to the east side of the main line, where the north portal and ramp are being built. A tunnel boring machine arrived on site in February and is now excavating two 3.5-metre diameter guide tunnels beneath the main line.

The nine-day closure, pencilled in for 6-15 September, will be used to slide an 11,000-tonne curved concrete box into place which will house the new tracks. This box, around 160 metres in length, is currently being formed to the east of the main line within the north ramp of the dive under.

During the closure the tracks and overhead lines from the East Coast main line above will be removed for a 200-metre section, allowing space for the box to be carefully steered into position using hydraulic jacks in an operation expected to take five days, the curvature making this a particularly challenging exercise. Once this has been completed, track and overhead lines will be restored above and signalling modifications made to allow lines to reopen.

The signalling alterations are needed to maintain access to the Joint line with trains in close proximity to the worksite, as the diversionary route will be used for the reduced service operating during the nine-day period. Network Rail is also investigating the possibility of keeping one of the Stamford lines open for bi-directional working so a small number of trains can continue north on the East Coast route via Grantham, rejoining the main line via a freight-only link line at Helpston Junction (located where the Stamford and East Coast routes part company), although this route would only be available to diesel-powered trains. After the possession, ballast will be laid and track installed on the new formation.

The Stamford lines have both been moved to the west of the dive under box, but for the Up line this position is temporary, and at Christmas it will move east again to sit above the box. Switch and crossing works at Marholm Junction (where the dive under lines will leave the Stamford lines) will begin at Christmas to connect the new tracks to the main line, although a further possession will be needed for switch and crossing work on the down line, which is likely to take place in February.

To the east, the new lines pass under an existing bridge span beneath the A15 formerly used by Hurn Road, which has been diverted to make way for the new twin tracks. A new bridge span will take the tracks beneath Lincoln Road, after which they will join the line towards Spalding at the new Glinton Junction.

From a signalling perspective, most alterations have already been completed with provision made for the dive under but not yet switched on. The final signalling stage to complete the project will see this go live in March or April 2021, although this will not be a disruptive possession.

Morgan Sindall is the principal contractor for the Werrington project, with Network Rail engaged in a hub and spoke arrangement with the Central Rail Systems Alliance for the track element, and Siemens the signalling contractor. The dive under includes passive provision for electrification, which would take the form of a conductor beam; ballast would be replaced with slab track and the track lowered to make space for this. 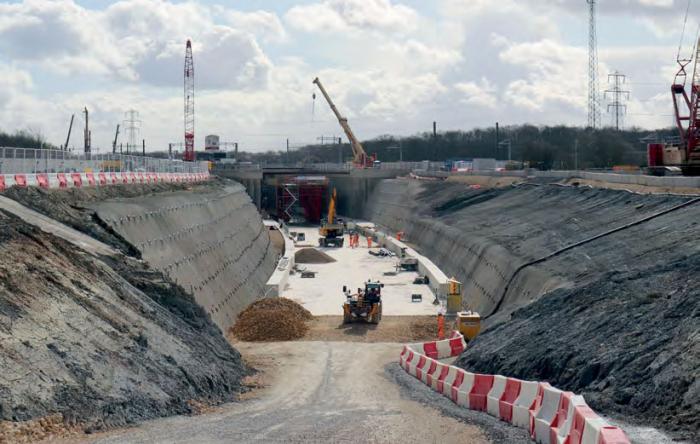 Dive under takes shape: the view of the new grade-separated alignment at Werrington on 12 March 2020, with the East Coast main line at right.
Philip Sherratt

Elsewhere on the East Coast main line, provisional dates for further works relating to the remodelling in the station throat at King’s Cross include a full closure of the station on 20-21 June and another on 5-6 September to coincide with the opening weekend of the proposed nine-day closure at Werrington. These prelude a period of more prolonged disruption planned to start on 19 December and run through to March 2021 when the bulk of the work at King’s Cross will take place, bringing the third bore of Gasworks Tunnel back into use.

The East Coast upgrade is due to culminate in an improved timetable in December 2021 which will include eight long-distance paths per hour, up from six today. 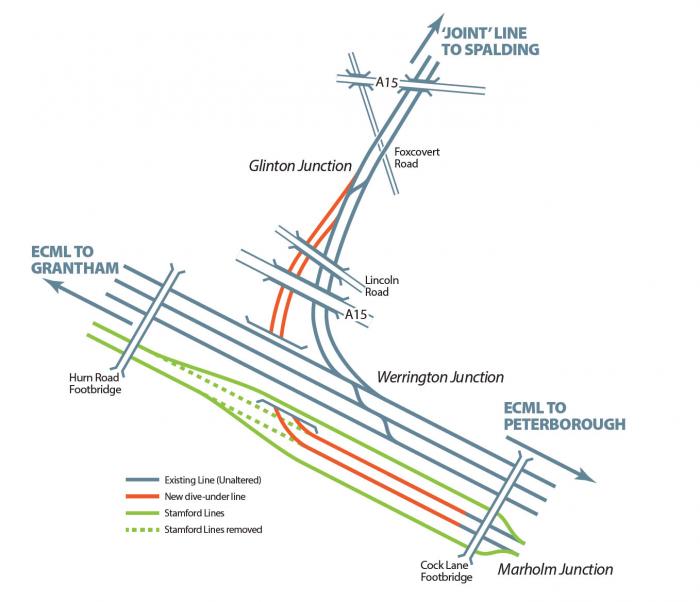