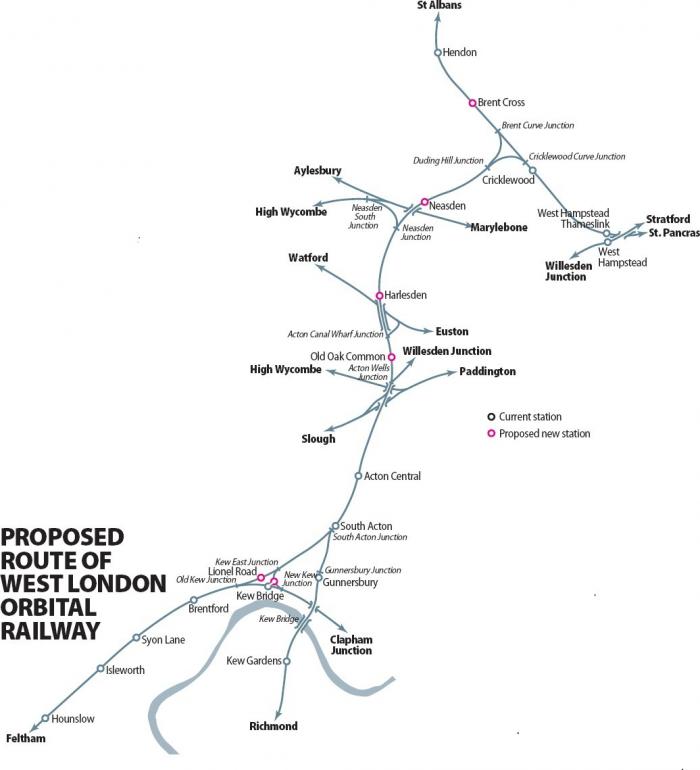 The scheme is listed for development in the Mayor of London’s Transport Strategy.

According to the SOBC, it would help bring land into use for housing and employment, provide connectivity to address public transport severance and deliver benefits for the wider transport system. The SOBC suggests the WLO could enable delivery of 8,800 new homes, with up to 29,000 new homes delivered if a more flexible approach to planning was applied. The scheme is suggested as having medium to high value for money.

The service would involve passenger trains returning to the Dudding Hill line between Cricklewood and Acton, before joining the North London line near Old Oak Common as far as South Acton, and then using the non-electrified link to the Hounslow loop to reach Brentford and Hounslow.

Key elements of the scheme include new stations at Neasden and Harlesden on the Dudding Hill line, while it is assumed WLO services would call at the new Brent Cross West station on the Midland main line. Challenges include bridge works for four-tracking at Acton Wells Junction, resignalling of the Dudding Hill line and construction of a turnback at either Kew Bridge or a new station at Lionel Road.

The capital cost of the scheme has been calculated at £273 million, at 2017-18 prices, with a sensitivity considered for a further £100 million increase. The SOBC suggests no ‘showstoppers’ have been identified to stand in the way of delivering the scheme, although there would be some significant challenges.

WLO is not currently included within TfL’s Business Plan and no external sources of funding are currently allocated to the scheme, meaning funding would need to be identified. Suggested options include developer contributions such as a community infrastructure levy, incremental business rates and wider contributions from the Department for Transport, TfL or workplace parking levies.

The proposed service comprises 4tph (trains per hour) from Kew Bridge to Hendon and 4tph from Hounslow to West Hampstead, providing 8tph on the core stretch, with this option having a benefit-cost ratio in the range of 1.4 to 1.8. A second option, for just a 4tph Hounslow to Hendon service, has a slightly higher BCR of between 1.7 and 2.0. This is based on the 8tph service delivering a net revenue benefit of £2 million per annum once abstraction from other modes (notably bus and London Underground) is deducted. The 4tph scheme offers a higher net revenue of £3 million because of lower abstraction, despite its absolute revenue being over 20% lower.

The business case assumes the use of diesel trains and is modelled on four-car Class 172 stock. Electrification is described as being capital-intensive with limited benefits given the volume of trains expected to use the route. It is suggested battery-powered trains might be used on the WLO route, although in the longer-term full electrification could be pursued.

The SOBC concludes there is a strong case to take the scheme forward. After further feasibility work, it is suggested planning, design, approval and procurement could take place in 2021-22, allowing opening in two phases in 2026 and 2029.

THE OFFICE of Rail and Road has reported a reduction in Network Rail’s efficiency during Control Period 5 (2014-19). The assessment covers the final six railway periods of 2018-19, the final year of CP5, as well as an assessment of the period as a whole.

ORR has already issued an order against NR requiring it to identify and address issues relating to train performance and service recovery.

During the five-year period, a 19.4% improvement in Network Rail performance was agreed in the ORR determination, but in fact a decline of 7.4% resulted, equivalent in cash to a £10.1 billion worsenment, albeit with spending brought under control during the last two years of the period. In Scotland an improvement of 3.5% was achieved.

During CP5 £19.8 billion was spent on enhancements, 50% more than in CP4. 85% of the overspend was on enhancements, including on Great Western electrification, Crossrail and the Thameslink Programme. The only large scheme said to be on spend profile was the remodelling at Waterloo at £466 million; the Borders Railway reopening was also brought in on cost but at the expense of some project outputs. Overall, in CP5 there were 311 regulated milestones, of which 79 were re-planned. Of the remaining 232, 168 were delivered on time but 64 missed. Delivery of the enhancements programme in Scotland is praised, with ORR highlighting a strong finish to the Control Period north of the border as 58% of milestones were delivered on time.

Renewals consumed £15.2 billion in CP5, £1.2 billion in excess of the determination, with most of this (£949 million) occurring on track where assumed productivity was not achieved. The report notes that in 2018-19 renewals were very much concentrated in the last three months of the year and expresses concern that ‘quick spend’ is not necessarily the best way of obtaining value for money.