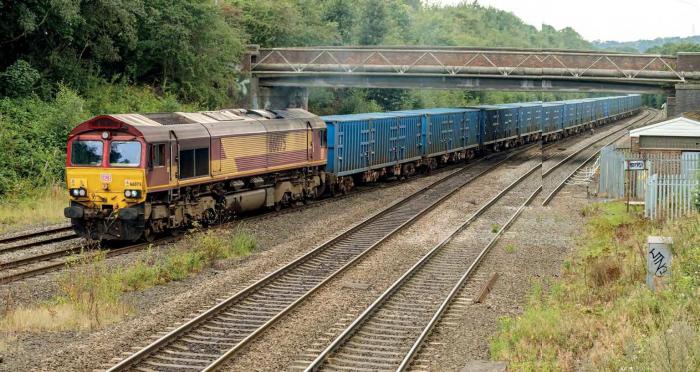 Trans-Pennine freight: DB Cargo loco No 66075 takes the Down Lancashire and Yorkshire route at Thornhill LNW Junction with loaded binliner working 6E26 from Knowsley to Wilton on 1 September 2020. Russell Wykes

A PATH-BREAKING freight trial that took place in December 2020 (p18, last month) could herald important new flows for the railway. The trial was undertaken by Freightliner and Network Rail in conjunction with food company KraftHeinz and its logistics partners Wincanton and Samskip. It explored the opportunities for offloading on the running lines, thus building on experience with loading timber on the running lines that has been undertaken in the Scottish Highlands in the past.

KraftHeinz’s distribution centre is in the Orrell district of Wigan, with the Wigan Wallgate to Southport route the closest railway line. The trial involved a container train that was sent from Crewe to the branch on an overnight working, with the notional offloading taking place from the running line close to Gathurst station. Also demonstrated was the feasibility of loco run round in this area. Network Rail signallers helped ensure the success of the trial by facilitating the use of a crossover at Parbold station for the run round (some signal alterations would be likely if this became a regular operation).