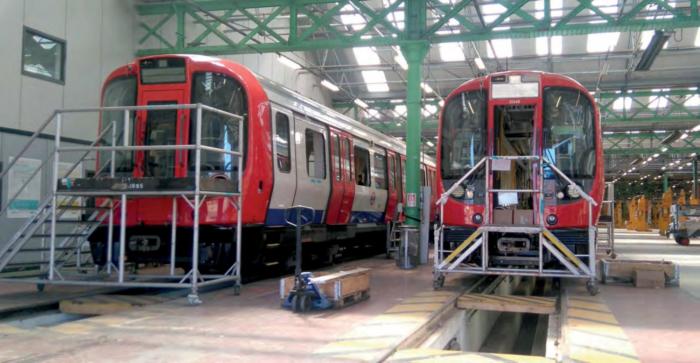 The scheme covers resignalling of the four sub-surface lines, which will progressively migrate to automatic train control (ATC) from summer 2018, when the Edgware Road to Hammersmith section is due to go live. Thales is the signalling contractor using its communications-based train control (CBTC) equipment, which will take advantage of the capability of the new ‘S’ Stock trains supplied by Bombardier.

Around 70% of trackwork modifications have now been completed across the four lines, in many cases involving simplifications to the layout. Much of the work to upgrade the power supply has also been completed – LU is switching to 750V DC for the S Stock, as opposed to the 630V supply previously used, while cable routing works and provision of aerials for the new CBTC equipment are ongoing. Depot works are also progressing – alterations at Hammersmith are now completed, with some work still to take place at Ealing Common and Neasden along with modification of the wheel lathe at Upminster so it can service a complete S Stock train.

Fitment of the Thales ATC equipment to the S Stock trains is also ramping up, with eight trains modified as of early May (four eight-car S8 trains for the Metropolitan Line and four seven-car S7 units for the other three lines). A maximum of 10 S Stock trains will be away at Bombardier’s Derby factory for fitment at any one time (four S8 and six S7); with deliveries now complete, the fleet is larger than required to operate the present timetable, as it has been sized for the enhanced 32 trains per hour (tph) service to be introduced by 4LM. LU retained a number of D Stock trains for the District Line as insurance, but the last run in passenger service for the type was on 21 April (‘Moving Wheels’). The original intention was to establish a production line at LU’s Ruislip depot to aid ATC fitment on S Stock trains, but LU intends as far as possible for the units to be modified at Derby, utilising manufacturer Bombardier’s expertise.

The 4LM programme seeks to introduce an enhanced service of 32tph on the core sections of the sub-surface lines by 2023. Present thinking would see the Circle and Hammersmith & City both operating at an 8tph frequency, with 16tph on the Metropolitan Line between Aldgate and Baker Street and District Line services running at 24tph on the core section. It is understood work is still ongoing to resolve timetabling conflicts at a number of key junction locations.