New train deliveries, or the lack of; and reliability, or lack of, are likely to be a recurring theme of 2020. Meanwhile, this month it is a case of hail and farewell as the table-topping Siemens Class 707 electric multiple-units of South Western Railway leave the Table of Truth, trailing clouds of glory and clutching two Spanners from the 2019 Awards. To the Golden Spanner as the inaugural TIN-Watch Champion, Wimbledon depot also garnered another Silver Spanner for Most Improved 2nd Generation New EMU. 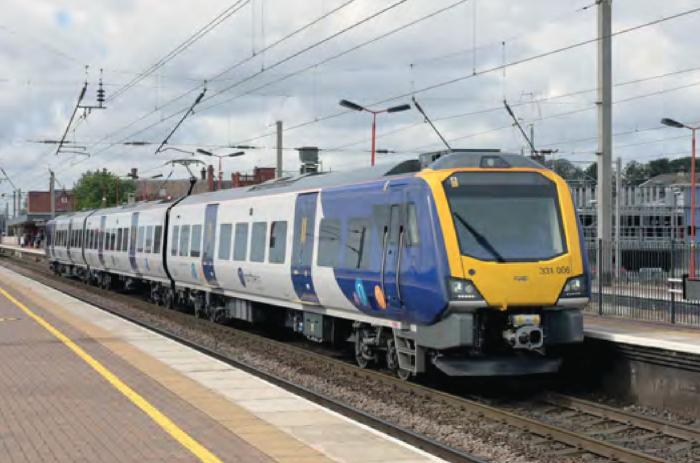 CAF EMU in the North West: No 331006 passes Wigan North Western on a driver training run on 6 September 2019.
Paul Senior

With the Class 707s the fourth most reliable EMU fleet on the network, they have clearly outgrown the nursery slopes. This leaves the question of what level of reliability will be required to graduate in future. However, we have plenty of time to work that out.

The TIN-watch table is based on four-week railway operating periods, of which there are 13 in a year, which falls out of sync with the magazine’s monthly production cycle. Thus there is a need for a catch-up month. With the period and Moving Annual Average scores for Period 7 contained in the annual fleet reliability review (p54), the TIN-watch table jumps to Period 8.

With that we welcome the TransPennine Express Hitachi Class 802s to TIN-Watch. Hitachi’s latest customers are reaping the benefits of placing repeat orders off a hot production line. Thus the TPE bi-modes are entering service at reliability levels it has taken the GWR Class 802s a couple of years to achieve.

As an example of the hard graft put in on the GWR fleets, the Class 800 units are now on software Version 74. To put this in context, with these software-enabled trains, a software upgrade may be introduced to correct a bug in the seat reservation system. The fleet is now over 10,000 MTIN MAA, which augurs well for the step-up of service intensity with the new December Great Western timetable. 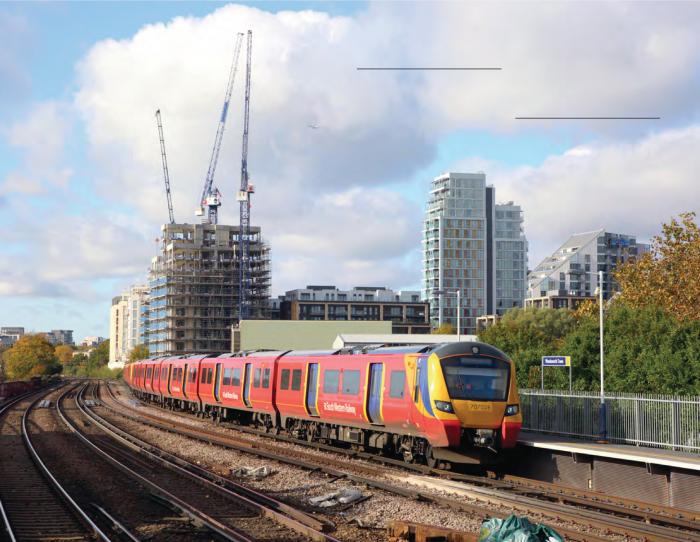 Bowing out of the table: SWR’s Class 707. Nos 707028 and 707021 pass Wandworth Town on a Hounslow roundabout working on 7 November 2019, with evidence of the Battersea building boom in the background.
Jamie Squibbs

Talking of software, CAF’s modification to the Class 331/397 traction package seems to have cured the resonance in the 25kV traction supply that had been annoying other traction (‘Informed Sources’ last month). The final proof came with a bravura piece of empiricism that might have impressed even the late Dr Mike Reece.

For the final tests CAF connected up to seven Class 331 and two Class 397 units to the overhead line electrification (OHLE) at the same time, without reproducing the low-frequency line voltage oscillation experienced with stabled sets. The high spot of the testing came during the period when two Class 92-hauled Caledonian Sleeper services would be crossing the critical feeding section at Preston.

Six Class 331 units and two Class 397 units were connected to the line voltage. The worst-case configuration for stabled units, with all the traction converters connected, was set.

Monitoring the overhead line voltage showed no low frequency line voltage oscillation, with voltage within the normal range. And the sleeper services crossed the section without either Class 92 throwing a fit of the vapours.

More good news at the bottom of the table, where Vivarail seems to have gripped the Marston Vale Class 230s. Note that the Period 8 MTIN is marginally better than that of the Greater Anglia Stadler Class 755 bi-modes.

While Greater Anglia managers are holding their heads erect and whistling a happy tune, the ‘Basils’ as they are fondly known at Crown Point depot, are having a torrid time. On Monday 2 December buses replaced trains on Ipswich – Peterborough services because of a shortage of trains.

Next day, at Stowmarket station, the driver of No 755419 instructed the train to change to diesel power for the run to Cambridge. The diesel engines started but the pantograph remained raised. 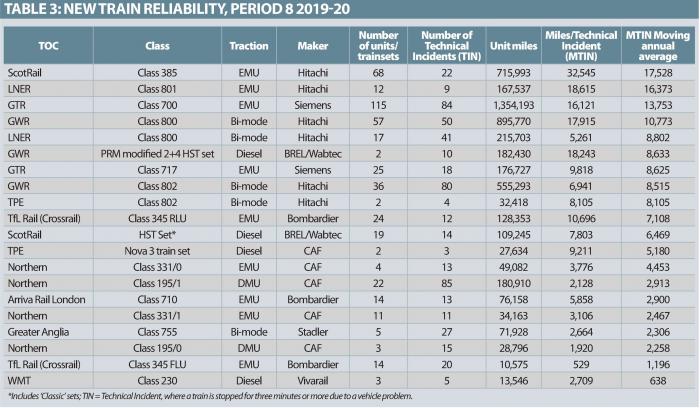 Shortly after crossing onto the branch towards Bury St Edmunds, where the contact wire ends, the pantograph rose and the over-height protection triggered the Anti Drop Device (ADD). However, while the pantograph was lowering it hit a cross span of the OHLE.

With the pantograph forced backwards and the upper arm at an angle to the horizontal, it was out of gauge. A minute later the wreckage hit a low bridge, causing further damage. 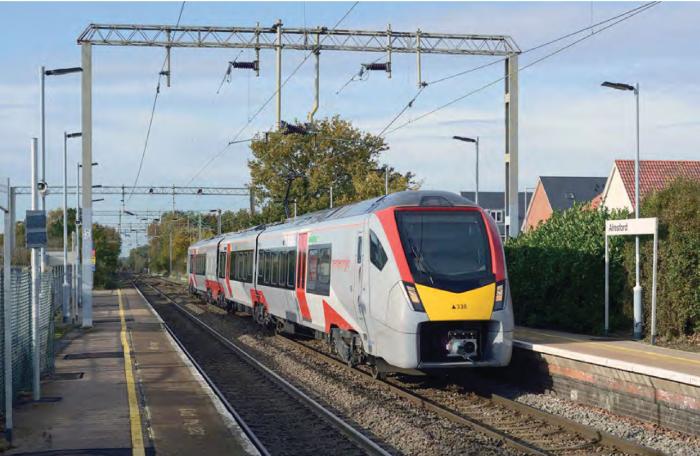 Bound for the seaside: Stadler bi-mode No 755338 passes Alresford on the Clacton branch on 12 November 2019, while en-route from Norwich Crown Point to Clacton depot to test the depot’s lifting jacks.
Antony Guppy

This seems like a software issue, since the driver’s command should start the engines and lower the pantograph. Anyway, operation under electric traction has been suspended until the cause has been found. Meanwhile, more legacy DMUs are leaving.

And all this was before an issue with activation of track circuits caused further disruption (‘Moving Wheels’). 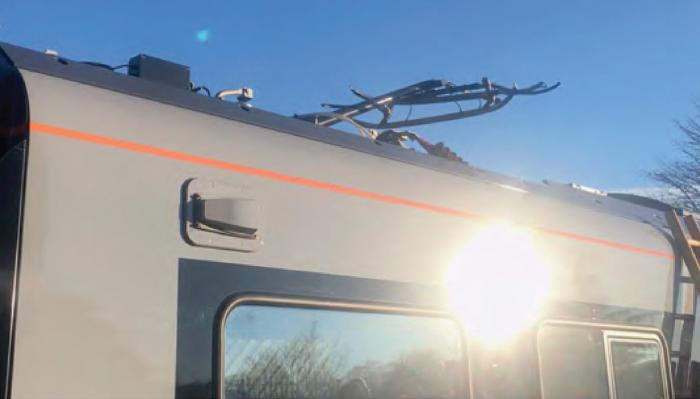 Clobbered: the state of No 755419’s pantograph after arguing with a bridge.
Brad Wright

All that remains is to wish readers a peaceful and joyous Christmas and a happy new year. Plus, of course, to remember the members of the Orange Army working over the Christmas and New Year period on the renewals and enhancements that will improve our journeys in 2020. Work and travel safely.