FOLLOWING THE granting of planning permission (p25, September issue), Network Rail is about to commence work on a three-year project to create a new dive-under on the East Coast main line at Werrington, north of Peterborough.

The aim is to reduce delays and conflicting movements on the main line caused by services joining and leaving the Great Northern & Great Eastern Joint (GN&GE) line to Lincoln, via Spalding. By facilitating the diversion of freight services via the GN&GE, the project should allow two extra long-distance passenger paths per hour on the ECML.

Planning for the project has been underway for five years, and will allow services from the slow lines to cross to the GN&GE without impacting on the fast lines. Various proposals for a grade separation were put forward for both industry and local consultation, with the choice finally being made for a diveunder that was not only cost-effective but also reduced the impact on the surrounding area. Initial work involves the diversion of a drain that runs parallel to the ECML. Once moved this will allow the Stamford lines to be slewed onto a new alignment, providing the space to create the graded route down to the tunnel box beneath the ECML.

The box will be formed from precast concrete sections that will be built on site and then jacked and hydraulically slid into place under the main line, an operation that is likely to require a nine-day closure of the ECML between Peterborough and Grantham. Once the box is in place, the new Up Stamford line will be located alongside the ECML, on top of the box, as this arrangement will allow services from Stamford to join the slow lines, at the same time as services head north from the slow lines on to either the GN&GE or Stamford lines. Network Rail says the project is likely to take around three years to complete, with the new lines coming into service during 2021. Richard Tuplin 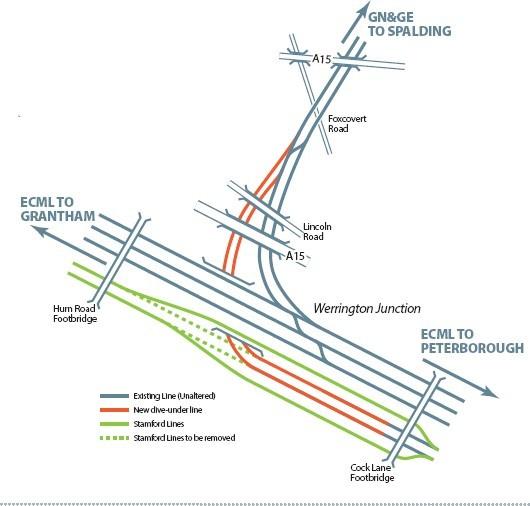